From the very beginning

Thomas Schmidt walks purposefully down the corridor. It’s easy to get lost in the maze of paths through the large premises. That happened to him now and then during his first year at Mohn Media. Today, he knows precisely where he is – literally and figuratively. He knows the numerous corridors, the different departments, and he knows what’s important for printing projects: painstaking work, starting as soon as the data is delivered.

Thomas Schmidt has been working at Mohn Media for 30 years. During this time, the now Data Delivery Team Leader has looked after a number of customers, ranging from a major German news magazine to a British fashion catalogue. While the projects are frequently very different, they all start in his pre-press department, and many of them end up in a job folder. He has just been informed by a colleague from Customer Service that he can make a start on the production of a catalogue. Thomas Schmidt keys in the last few pieces of information and prints out the form sheet. Mohn Media also prints several inserts for this customer, which will ultimately be sent out together with the catalogue. With so many individual steps involved, there can be no mix-ups. He glances at the form one last time, slots it into a job folder edged in red and then passes that on to a colleague. At this point, his team takes over. There is no doubt in his mind that the production process will run smoothly. During meetings with the customer, he planned each working step in advance – down to the smallest detail.

Understanding the customer and their product is at the heart of Thomas Schmidt’s role. He asks questions. Lots of questions. Quite often, these are questions that nobody else has considered. This was also the case in his first meeting with the customer, for whom he is now preparing the data delivery transfer for the catalogue, during which he - as usual - wanted to pin down every little detail. Among other things, he asked how the different inserts were to be referred to. The customer initially dismissed this as a trivial question until it became clear that everyone on the project team was using a different term for them. To ensure that production can proceed quickly and smoothly, it is important that both the customer and Mohn Media use the same terms for different product parts and components. There can be no room for uncertainty when time is ticking. Thomas Schmidt suggested two new names. Instead of talking about the ‘letter’ and the ‘address cover sheet’, the terms ‘sheet 51’ and ‘sheet 52’ would be used in future. He knew from experience that most people are better at remembering numbers.

He then discussed the technical data with the customer so that everyone got an increasingly clear picture of what the catalogue and the inserts were supposed to look like. He entered all information relating to this job into the pre-press intranet, to which he and his colleagues all have access. Shortly afterwards, the testing of the data and of the transmission channel began. The team received the customer’s last few adjustment requests and produced a perfect proof of the product to be printed. Despite the tight timeframe, quality is always the top priority.

Things often need to happen fast around here. Despite the tight timing, we focus on quality and security during each step of the operation. 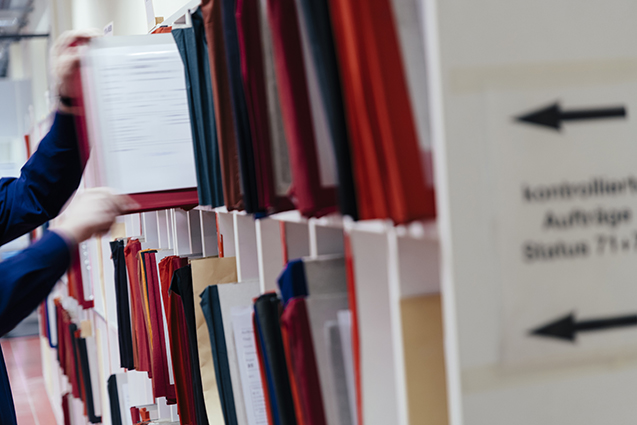 To be able to stick to the tight schedule, every step must be carried out properly.

Speed is of the essence

Thomas Schmidt is only too familiar with such projects. When he walks along the long corridor to his office, past Customer Service and the Repro Department, he can virtually feel time running a little faster with each step. Time is money in the Pre-Press Department. And that is especially true for one job in particular: for several years now, he and his team have been handling the pre-press process for a large German news magazine. When he receives the data at night, he only has a few minutes until the printing plates need to be exposed. This situation requires perfectly coordinated workflows, concentration and teamwork. Assuming everything is ok with the supplied data, the job folder is taken down the corridor as quickly as possible and handed over to the colleagues who expose the printing plates. The job is then passed on to production, where the machines spit out innumerable printed sheets at top speed. Less than a day after Thomas Schmidt received the data, the freshly printed copies are already on sale at the news stand. He spent around six months in regular consultation with the relevant people at the news magazine. They discussed every eventuality to make sure that the team would immediately know what to do if a problem were to arise, regardless of how unlikely.

Although Thomas Schmidt has acquired a great deal of experience over the years that he has worked at Mohn Media, he can’t know everything himself. As such, he receives assistance from a digital brain with unlimited memory capacity. He and his colleagues have permanent access to the intranet, in which all customer-specific information is stored. There, they can read up on what has been discussed with whom, what the important aspects of any particular project are and when the printing is to take place. This is important as the team around Thomas Schmidt often works on a great number of different jobs on any particular day. Before they begin with their work, their colleagues in Customer Services record the most important details and enter them on the system. In Data Delivery, the information is then meticulously checked once more before production begins. Is the data received from the customer correct? Is the timing feasible? If everything is ok, the form goes into the job folder.

While printed job documentation is still important, much has been digitised over recent years. Today, the order details and printing data are sent to Thomas Schmidt and his team via email or data transfer. It only takes a few clicks for them to access the entire job. Consequently, data security is of great importance. Nothing must get out before the date of publication. The colleagues in Data Delivery keep the project details to themselves, while IT ensures secure data transmission. The digital security measures and firewalls are much less visible than in the past. Thomas Schmidt remembers how data for printing projects used to be delivered: a locked case with the printing data was driven to Mohn Media in a taxi. The key to the case arrived in Gütersloh at a different time in a second taxi. He used to feel a bit like James Bond on a secret mission.

The telephone ringing drags him back into the present. A new customer would like to have a monthly magazine printed by Mohn Media. Once again, production needs to be completed quickly. Customer Service staff have already entered the first key data into the pre-press intranet. Thomas Schmidt takes a quick look; this is another job requiring a custom solution, where timing, quality and data security are particularly important. The first joint meeting is set to take place the following week, at which time he will have the opportunity to ask all the questions that are already racing through his mind. As soon as he has all necessary information, he should be able to initiate production. He will then be able to look across from his desk and see steam rising from the print shop across the corridor. A few hours later, the freshly printed magazine will land on his desk – and another project that Thomas Schmidt initiated will have been completed.

Would you like to have your project printed by us?